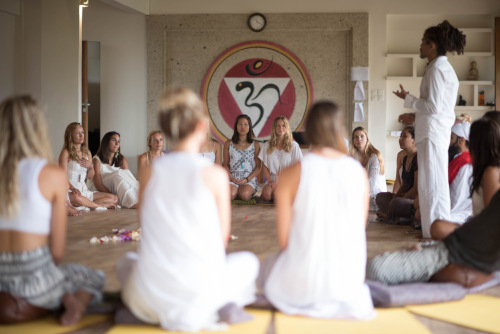 Humans are intelligent creatures, but we are also emotional. Situations arise that challenge self-control and push it to breaking point, and the body reacts in negative ways. It doesn’t help that modern fast-paced society encourages us to repress our frustrations at the same time that it inspires impulsiveness. Such contradicting ingrained behavior makes us unconsciously resort to sadness, stress and anger without resolving what caused these emotions to begin with.

Osho offers helpful insight from among these 101 anger quotes, regarding how anger and sadness are related. If someone is unable to express their anger in a frustrating situation and are forced to suppress it, then sadness takes over. Once in a more comfortable environment, however, that unfulfilled anger may return with the slightest provocation. The good news is that this behavior can be unlearned or restructured through the scientifically proven physical and mental benefits of holistic activities like yoga. In order to understand this better, we’ll go through examples of a specific form of confinement, namely seated situations, that can draw emotional outbursts, but which can be eased by practicing simple stretching, strengthening and breathing exercises.

First, let’s briefly see what kind of research has been done and what it says about yoga. The handy collection of studies available on Health Grinder includes one conducted at Boston University, which proved, after a 12-week observation of subjects aged between 18 and 45, that yoga is better than walking in terms of reducing anxiety and improving mood and Gamma-Aminobutyric Acid (GABA) production, a neurotransmitter that calms the brain.

Stress relief is a known benefit of physical exercise as it causes the brain to release endorphins, which ease pain and create a sense of euphoria. Imagine what this can do for someone’s angry impulses. Yoga is the perfect calming activity to combat hostility and promote reflection and self-control. While external influences on individual and group consciousness may be almost impossible to control, our own emotions are easier to reason with.

Work can be riddled with frustrations, from long hours to exhausting bosses. Its distractions can make it difficult to remember to take care of your mind and body, co-dependent aspects of your being that define your overall happiness. Simple yoga techniques to help stabilize your physical and emotional energy, such as a seated Cat Cow exercise to relax your spine and controlled breathing combined with a silent mantra to focus an overwhelmed psyche.

It’s not in classes that inner peace can be found, but in people. When the day becomes too much, all you need are these poses and practices that can be applied in your chair, if a quiet space away from the bustle of the office is not available. Considering the worrying statistics revealed by The American Institute of Stress regarding workplace behaviors, including a 2000 Integra Survey where 42% of workers reported that verbal abuse was common and 62% that they ended their day with neck pains, substituting our taxing, antisocial habits for soothing, holistic exercises is a step in the right direction towards improving our quality of life. It’s important to emphasize that life is more than our professions. Meaningful human interaction and personal growth within a world of energies and mesmerizing mysteries are far more natural pursuits than breaking your backs to produce a spreadsheet.

There are many types of seated work, some more enjoyable than others. The same strain is put on the body, however, whether at a desk or in front of a monitor. The difference is that gamers happily forget themselves in a hunched position for lengths of time, yet are just as surprised at their body aching and their mood "tilting". This last term that typically characterizes negative behavior in casino games, like blackjack or roulette, was originally coined to describe poker players getting upset over a mistake or bout of bad luck and then letting that frustration drive their playing style.

Today, tilting is used in a broader range of gaming contexts, where mishaps cause players to lose control of their emotions, especially during long and stressful events. Losing at a highly immersive game can make tempers combust, whether at home or a tournament. RedBull, a regular eSports sponsor, advises against fuelling such unhealthy reactions. The company adds its voice in support of dedicated players using yoga not only to stretch cramped muscles and strengthen their bodies in preparation for hours of sitting, but also to improve blood circulation, digestion and, of course, their mental stability. Developing that emotional intelligence poker players are envied for by psychologists and yogis alike is easier and more encouraged than ever by gaming professionals.

The lesson to be learned is that anger is often a result of disappointment or anxiety, a term whose very origin, the Latin “angere”, means to press tightly or choke. Yoga is designed to neutralize this suffocating feeling through slow, tranquil movements and breathing exercises. The adaptable nature of these techniques makes yoga an invaluable practice for any stressful environment, whether professional or entertaining. A calm and positive mind promotes a healthy body and together they create a worker who is happy, confident and efficient. The power of yoga is not to be underestimated.