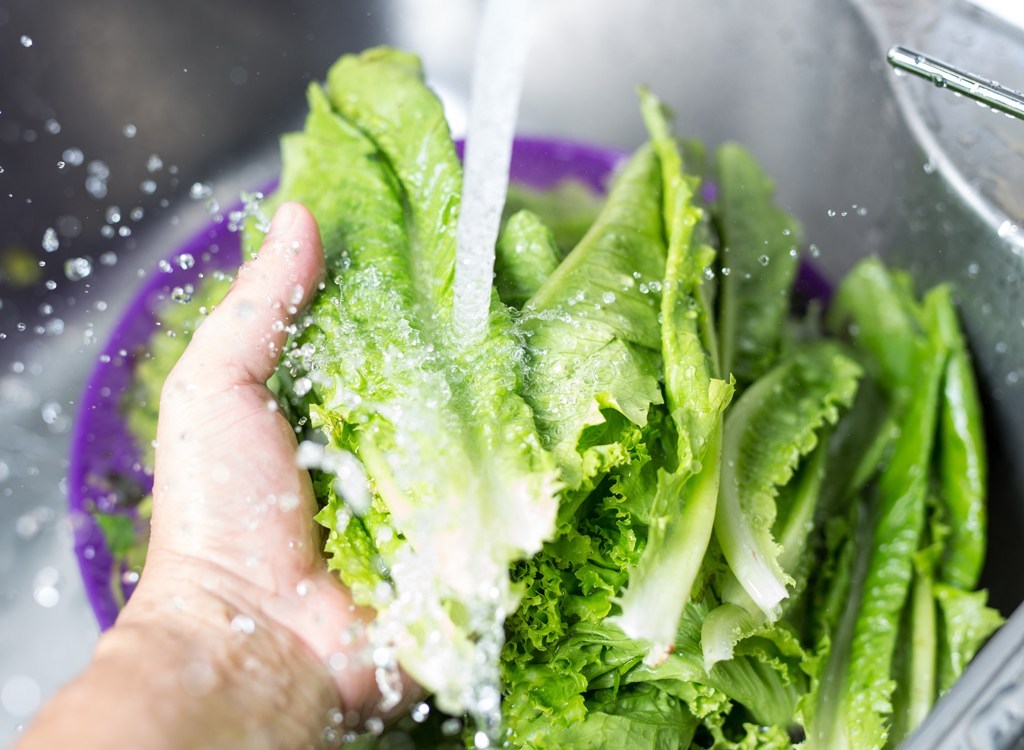 Preparing your food at home is a major step in the recipe toward weight loss. But always going by the book or trying to figure things out for yourself can be frustrating. These genius insights can change your kitchen game and empower your slim-down efforts!

Thankfully it's not difficult to make slimming mouth-watering fare. Here, 32 tips for better cooking, easier preparation, less weight gain, and more fun than you knew you could have while in the kitchen! For even more smart healthy eating ideas, check out the 40 Things Healthy Cooks Always Have in Their Kitchen!

When you're cooking from a recipe, ignore specific measurements for salt and pepper. Your mouth is more accurate than a measuring spoon. Taste and adjust as early and often as possible. Oh, and while you're at it, get rid of that salt shaker! Instead, put kosher salt in a small bowl by the stove and season with your fingers, which gives you real control and accuracy. And to add even more flavor to your food, incorporate some of these 5 Best Spices for Fat Loss into your dishes.

When you salt is as important as how much you salt. Season chicken, pork, and turkey (three of the 29 Best Ever Proteins for Weight Loss) up to 8 hours before cooking. The salt will penetrate the meat fully and yield juicier, more fully seasoned results. (That said, only season burgers seconds before throwing them onto the grill—otherwise the salt will break down the protein strands and create tougher patties.)

Too much salt? Use a splash of vinegar to provide a counterbalancing punch of acid. Too much heat? Try a drizzle of honey to mellow out the spice.

More specifically, shop for food on Monday or Tuesday before 10 a.m. or after 7 p.m. Research shows that these are the least-crowded times of the week at the market, making it possible to pick out first-rate products without the clamoring masses.

Surface moisture creates steam when it hits a hot pan or grill, impeding caramelization. If your fish has skin, use a sharp knife to squeegee off the water trapped within it. Not sure what seafood is best for your belly? Check out our guide to The Best Fish for Weight Loss.

For deeply flavored foods, don't overcrowd the pan. Ingredient overload makes a pan's temperature plummet, and foods end up steaming rather than caramelizing. This adds cooking time and subtracts flavor. All ingredients should fit comfortably in one layer, so use a pan that's big enough for the job, and cook in batches if necessary.

Teflon can deteriorate over high heat, so save your nonstick pans for gentler tasks like cooking omelets and fish. Yes, nonstick pans serve the same purpose, but they can release potentially cancer-causing toxins into your food. While the Environmental Protection Agency doesn't suggest forgoing nonstick cookware altogether, they also don't yet know the long-term health effects of nonstick chemicals, so it's better to err on the side of caution and stick with cast iron. Pick up a variety of different pieces so you're prepared for any culinary adventure that lies ahead.

Nothing beats crispy chicken skin, but frying is a no-go when you're trying to lose weight. Instead, buy a whole chicken the day before you'll cook it, sprinkle on a teaspoon of kosher salt, and leave it uncovered in the fridge. The air and salt will draw out excess water. Just be sure to pat dry with paper towels before cooking. For a complete meal, pair your chicken with a vegetable and one of these 25 Best Carbs That Uncover Your Abs.

Think of a broiler as an inverted grill, a source of concentrated, quick cooking heat. Chicken, pork chops, and steaks take about 10 minutes to broil; just be sure to flip them midway through the cooking process.

Instantly improve your next TV dinner: After cooking, add fresh herbs, a squeeze of citrus, and a drizzle of olive oil to transform any frozen entree. And to ensure your meal is a healthy pick, steer clear of these The 48 Worst Frozen Foods in America.

Same with peaches, potatoes (one of these 8 Best Fat Burning Foods, onions, bread, garlic, and coffee. Cold temperatures compromise the flavor and texture of these staples.

Warm food served on a cold plate is a rookie mistake. Heat your dishes in a 150°F oven for 10 minutes before plating a meal. On the flip side, lightly chilled plates (use your freezer) boost the freshness of cold dishes like summer salads.

Ingredients aren't set in stone. Mushrooms can stand in for eggplant if that's what you have. Don't want to spend $3 on a bunch of celery just to use a single rib? Omit it. You like pork chops more than chicken breast? Switch it. Point is, if you understand the basic techniques and know what tastes good together, the possibility for creation in the kitchen is infinite.

Sure, sometimes you just need a tomato, but there are three great reasons to shop in season: It's cheaper, it tastes better, and it's better for you (and the planet).

Talk to butchers, produce suppliers, and fishmongers before buying. They can steer you to the best ingredients. Your supermarket doesn't have a butcher? Find a new place to shop.

Drop your aging produce into ice water before cooking. Plants wilt due to water loss; ice water penetrates their cells to restore crispness.

Zap lemons, limes, or oranges for 15 seconds in the microwave before squeezing them. The fruit will yield twice as much juice.

Early arrivals get the first pick of all the prettiest produce; latecomers can score last-second deals from vendors looking to unload their goods.

Research shows that near-constant flipping of steak, chicken, chops, and burgers not only allows your food to cook faster, but also more evenly. Aim for one flip per minute.

Cooking and roasting tomatoes significantly raises the levels of lycopene, powerful compounds that fight free radicals and help to decrease cancer and heart disease risks. A study by Ohio State University showed that people who ate tomato sauce that cooked for 40 minutes had 55 percent more lycopene in their blood than those who had uncooked tomato sauce.

Although baking powder and baking soda are not the same thing and not interchangeable, you can substitute in a small amount of baking powder for baking soda and wind up preserving more of chocolate's antioxidants that are usually lost in the baking process. Just don't go crazy or else you'll wind up with a really flat, weird chocolate cake!

Apparently, toasting your bread can lower its glycemic index a bit, according to a study published in the European Journal of Clinical Nutrition. Even better: Your body absorbs less glucose from bread that has been frozen before toasting. Bottom line: First freeze, then toast! Who knew?

Up to 50 percent more nutrients are absorbed from a runny yolk than from a hard-boiled or over-hard egg, says recent research. No idea how to poach? All you do is crack open an egg into a pot of simmering water. Try these 25 Best Egg Recipes for Weight Loss, too!

No, this is not an excuse to get all fried-rice-crazy on us. But if you drop a teaspoon of coconut oil into your boiling pot of water before cooking your non-fortified rice, researchers from the College of Chemical Sciences in Sri Lanka say that the rice will have 10 times the resistant starch (a good thing; it slows down rapid digestion) and stays this way even as a leftover!

Another way to manipulate your healthy food to be even healthier: Freeze your blueberries! Their antioxidant properties are heavily concentrated in their skins and the ice crystals that form on the skin during the freezing process actually helps make the antioxidants more available to your body, according to a South Dakota State University study.

Similar to how oil can make rice better for you, pasta that has been chilled overnight (it's okay to reheat it!) will also keep you fuller for longer than if you had just cooked the noodles and served them right away. Keeping your pasta cold is one of the 40 Ultimate Pasta Tips to Stay Skinny!

The easiest kitchen hack ever? Keep your avocados out on the counter to let them ripen faster and put them in the fridge when they are to get ripe so they'll last longer. A surefire sign that an avo is well on its way to be ripe is when you can easily pop the "button" off the top of it.

Instead of being efficient and slicing your strawberries all at once to easily enjoy later, you'll want to keep them whole until you're just minutes away from eating them. Vitamin C is sensitive to light and oxygen and loses some of its antioxidant powers once it's been exposed. The holds true for oranges as well, which have a little less Vitamin C than a cup of strawberries.

Instead of watching the bunch of parsley go bad, chop it up and mix with a tiny bit of oil and then freeze as ice cubes that you can throw into soup later. Or sauces for quick, individual meals. Or kale for smoothies. Get creative! We don't, however, recommend onions since they soak up bacteria like crazy and you really shouldn't ever use leftover, already-cut onion.

You went through all this trouble to make healthy cookies, so don't let burnt bottoms ruin your day! Simply grab your zester and grate the black part off. Nice!

For the quickest clove peeling process ever: Place the clove onto a cutting board and then smash it using the side of a chef's knife and your fist. It's fun to do and saves you time!